One of my goals in starting A Busy Mom’s Kitchen is to share not only healthy and delicious recipes but also strategies that have helped me make home cooking more than the norm in my family than the exception.  One of my strategies is to plan and shop ahead for a week’s worth of meals.  Another is to minimize the amount of time I spend in the kitchen preparing food by doubling recipes and freezing the second portion for use later.  Marinara sauce as well as soups, such as the ones here and here, are perfect for this strategy.

A third strategy is to make sure that all of the ingredients needed to make a weeknight home-cooked meal are prepped and ready to go before I start an evening’s meal.  It can include green beans that I’ve already steamed and need only to toss in some warmed olive oil, followed by a sprinkle of herb salt and pepper before serving.  It can include the entrée portion of the meal, such as a baked pasta dish that I made the weekend before and have only to reheat in a 350 degree F oven until it’s hot and bubbly.  While it’s in the oven, I’ll throw together a quick salad using prewashed greens and, in less than 30 minutes, dinner is done.

This strategy can even include something as simple as freezing serving size portions of condiments that typically come in a much larger quantity, such as tomato paste, pesto, and even chicken stock.  That’s the strategy I’m sharing with you today.  Not only does it help streamline meal preparation, equally importantly, it eliminates waste. 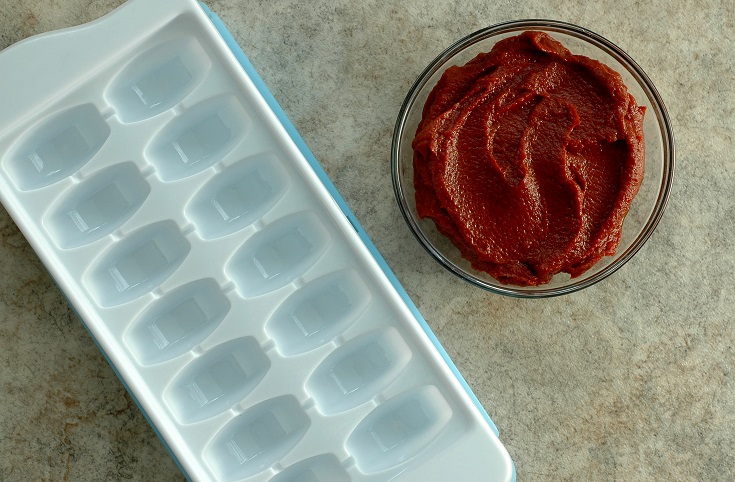 For example, how many of you have ever used an entire can of tomato paste?  If you’re like me, the answer is rarely.  Most recipes call for a tablespoon or two.   The remainder goes into the fridge, where it takes up space, forgotten and forlorn, until it’s rediscovered a few months later during an infrequent fridge sweep.  At that point, it’s no longer fit for consumption (as evidenced by patches of mold marring its surface), so into the trash it goes.  Another nearly full can of tomato paste gone to waste.

This tip both eliminates this waste and makes tomato paste available in just the right quantity for when you need it.  There are numerous ways to do this.  Both Martha Stewart and the Kitchn have suggestions.

My preference, however, is to freeze blocks of tomato paste in an ice tray dedicated for this purpose.  (I wouldn’t use an ice tray that you also use to freeze water or other items, since the tomato paste will stain the tray and possibly discolor or even flavor anything else you freeze in it.) The one I use, which I found at T.J. Maxx, has a cover, making it perfect for this task.    Just fill each compartment with some tomato paste, slide on the cover (or wrap in plastic if your tray doesn’t have one), and then freeze overnight.  You can either store the frozen cubes in the tray, or remove them and store them in a freezer bag as I do.

To use them, take a cube out of the freezer and place it in a small bowl.  You can let it thaw on the counter for about 20 minutes, or you can speed up the thawing process by zapping it in the microwave for 20-30 seconds.  (Be sure to use a microwave bowl and cover it with some plastic or a paper towel in case there are any spatters.)

Now the most important question – what can you do with these frozen cubes of tomato paste?  There all kinds of uses for them.  Tomato paste is a concentrated form of tomatoes that has been made by cooking tomatoes that have been strained to remove the seeds and skin and then cooked for a long period of time to concentrate the flavors and eliminate moisture.  Use it anytime you want to add some depth of flavor and body to a dish but no liquid.  I’ve added it to marinara sauce to thicken it and to the accompanying meatballs to add some tomato flavor.  I’ve also added it to soups, such as Italian minestrone and lentil; to meat- and legume-based stews; and to pan sauces, especially those that will be served with beef.  I’ve even seen recipes that have used it to flavor chili and to make Spanish rice.    Basically, if tomatoes can be added to a recipe, there’s a good chance that tomato paste will be equally welcome.

Finally, a quick note on why you want to add tomato paste to your recipes.  Tomatoes are an important source of the powerful antioxidant lycopene.  (Antioxidants play a critical role in fighting the effects of free radicals, molecules that occur as part of the body’s normal metabolic processes and, if left unchecked, can contribute to a wide variety of diseases, including cardiovascular disease, diabetes, and cancer.  Free radicals can also occur from exposure to toxic substances such as pollution and cigarette smoke as well as from stress and an unhealthy diet.  Antioxidants are able to neutralize the negative impact of free radicals in the body.)  To trigger its antioxidant effect, lycopene needs to be exposed to heat, which makes it more readily absorbed by the body.  Because tomato paste is simply tomatoes that have been cooked for a long period of time, tomato paste is a rich source of lycopene.

So go ahead.  Add tomato paste to your recipes with abandon!

One thought on “Freezer Staple: Cubes of Frozen Tomato Paste”