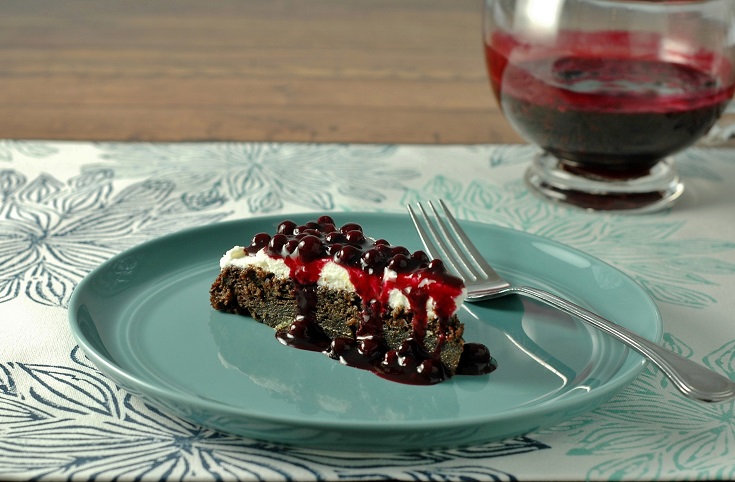 I think the makings of a different sequel to last year’s sci-fi blockbuster Divergent were unexpectedly revealed last week as the internet exploded over the colors of a dress.  This time instead of five factions, however, there will be only two:  those who see the colors as black and blue and those who see them as white and gold.

And if some see the dress both as black and blue and white and gold – what faction will they be in?  Why, of course, those are the Divergents, and their fate will be the knowledge that mother-of-the-bride dresses are neither black nor white but, um, varying shades of grey?

Ok, I’m just being silly. But who can resist the urge to have some pop culture mashup fun with two recent Hollywood blockbusters and that internet phenom otherwise known as “the Dress.”    It’s my version of cat video therapy.

Well, in honor of strange juxtapositions that can arise only because of the internet, I’ve created a dessert for the Divergents among us.  It’s a chocolate blueberry cake topped with whipped mascarpone cheese and lemon zest and garnished with wild blueberry syrup.  Is the cake black, or is it blue?  What about the topping?  Would you call it white with streaks of blue and gold?  Or is it white and blue with gold flecks?

If you ask me, it’s all of the above, which is why it’s amazing.  I started with a cake I’ve been making for years, Amanda Hesser’s Chocolate Dump-It Cake.  I first heard about the cake when Amanda did an interview publicizing her then new book, Cooking for Mr. Latte, for NPR.  She said that her mother made it for all of her kids’ birthdays.

Since then, like Amanda’s mother, I’ve made the cake for any number of occasions, including both my daughters’ birthdays and various celebratory occasions with family and friends.  The cake is hands down the best cake I’ve ever made, even after I tweaked it by reducing the sugar by half and substituting whole wheat pastry flour for the all purpose.  I highly recommend it.

For this occasion, however, I wanted to reduce the quantity of the cake to make room for the other components, plus I wanted to bring some blueberries into the mix.  Blueberries are truly a superfood, containing numerous phytonutrients that provide antioxidant and anti-inflammatory support for the entire body.  Blueberries also contain lots of fiber, which helps to slow the absorption of sugar into the bloodstream, lower cholesterol levels, and maintain intestinal health.

I added blueberries in two ways.  First, I added some pureed blueberries to the cake batter, which allowed me to reduce even further the amount of white table sugar added to the cake without losing both its sweetness (as previously modified by me) as well as the cake’s normal level of moistness.  The blueberry puree does mute the intensity of the chocolate flavor, but that was preferable in this case since I wanted the other flavors to have the opportunity to shine.

Second, I made a blueberry syrup using cooked wild blueberries (which are smaller and tarter than regular blueberries), which I used as a garnish for serving the cake. 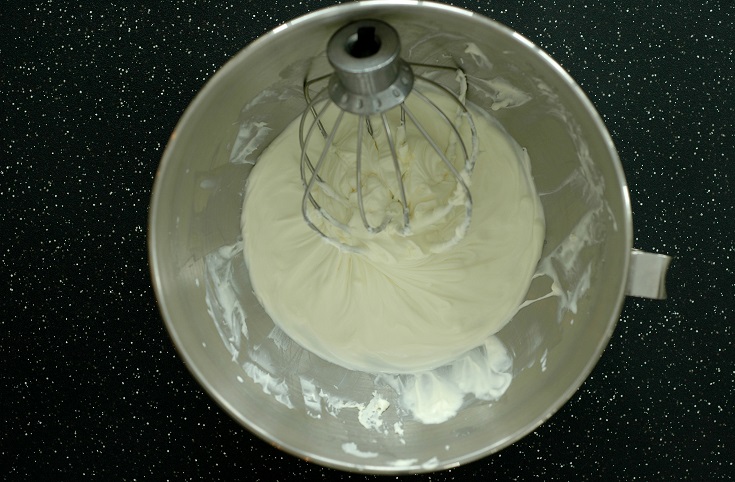 The frosting if you will is a whipped mascarpone cheese and cream topping.  Mascarpone is the cheese used in the Italian dessert tiramisu.  It’s a cow’s milk cheese that is high in butterfat.  This gives it a subtle sweetness and makes it highly spreadable, making it perfect for desserts.

Finally, I scattered some fresh lemon zest over the top because, well, why not?

The result is a deliciously informal cake that has less sugar, is full of nutrients and fiber, and can be made with items kept on hand in your pantry, refrigerator, and freezer.  I recommend it for everyone, Divergents and non-Divergents alike.

a.  First make a slurry by combining the 1 teaspoon of cornstarch and 1 tablespoon of water in a bowl. Mix until smooth. Set aside.

b.  In a small saucepan, combine the remaining blueberry sauce ingredients and bring to a boil. Reduce the heat and simmer for 5-10 minutes until some of the blueberries start to break down. Turn off the heat, pour the cornstarch slurry into the blueberries, and immediately begin to stir until the sauce thickens. Set aside to cool.

2.  Prepare the pan: Preheat the oven to 375°F, and place a baking sheet on the lowest rack, to catch any drips when the cake bakes. Prepare a 9-inch round springform pan by placing a piece of parchment paper over the base, tightening the pan’s band around the base, and then trimming the parts of the parchment that protrude beyond the band. Lightly spray the parchment in the pan and the inside of the band with some nonstick cooking spray. (You can use a regular 9-inch round pan if you don’t have a springform pan. Just be sure to spray it well so that you are able to remove the cake easily after it has baked.)

a.  Put the ½ cup of sugar, unsweetened chocolate, butter and ½ cup water in a saucepan. Place over medium heat and stir occasionally until all of the ingredients are melted and blended. Remove from the heat and let cool slightly.

c.  When the chocolate mixture in the pan has cooled a bit, add it to the milk and blueberry puree mixture and whisk to combine. Whisk in the egg. In several additions and without overmixing, whisk the dry ingredients into the wet ingredients. When the mixture is smooth, pour it into the prepared pan. Place the pan on the baking sheet in the preheated oven and bake until a toothpick inserted in the center comes out clean, about 25 minutes. Let the cake cool for 10 minutes, then remove the band from the base and let the cake cool completely. (Due to its high moisture level, the cake may sink a bit.)

5.  Assemble and serve the cake: Remove the cooled cake from the base of the springform pan and place it on a flat plate or a cake stand. Using an offset knife or spatula, spread the mascarpone topping evenly over the cake, and then sprinkle the lemon zest on the top. Serve in slices with a large spoonful of wild blueberry syrup on the top or on the side.

Make Ahead:  Note that all components of the cake can be made ahead and even repurposed. The ingredients for the cake can be doubled, baked in two 9-inch round pans, and frosted to make a regular layer cake. The mascarpone topping can be used to top other fruits such as strawberries and blackberries. The wild blueberry sauce can be drizzled over ice cream.