For the last week I’ve been reading the book, Paleofantasy by Marlene Zuk.  I ran across it during a weekend trip to the library and, because I’ve recently heard several people vigorously proclaim the benefits of the Paleo diet, I decided to give it a read to see what the diet’s opponents have to say.

Now I’ll say right up front that this post is not about the pros or cons of this newest health trend.  (I will say that I am skeptical of diets that forbid huge categories of nutritious foods — calcium-rich dairy and whole grains packed with fiber, vitamins, and minerals in this case — since such diets are generally unhealthy and unsustainable.  For me, the real benefit of the Paleo diet, and possibly the reason for any beneficial effects, is its ban on sugar and hyper-processed foods.)

What this post is really about is salt, specifically homemade herb finishing salt.

In her book, Zuk argues that even if humans evolved during the Stone Age to survive on a hunter-gatherer diet – consisting of meat and fish contributed by the tribe’s hunters and fruits and vegetables that were foraged by its gatherers – that evolutionary process didn’t suddenly stop when that era ended.  Quite the opposite occurred.  According to Zuk, human physiology has continued to evolve in the 10,000 years since the end of the Stone Age, sometimes as rapidly as a few hundred years or even a few generations.  Combine that observation with the fact that nearly all of the foods we consume today differ from their Stone Age predecessors, and it becomes difficult to conclude that our modern-day bodies are better suited to a Stone Age diet the makeup of which is speculative at best.

For Zuk, what is really at the heart of the Paleo diet is nostalgia for a simpler time when, or so it is argued, humans were in harmony with their environment.  Certainly Stone Age humans had to contend with their own perils such as predatory animals and constant food insecurity.   But those challenges seem simpler, in some respects, than those presented by our fast-paced, technology-driven, consumption-fueled modern life.

Case in point:  As I write this post, Brown Thursday and Black Friday are behind me, and Cyber Monday is a few hours away.  In other words, the annual month-long period of frenzied holiday shopping has arrived.

But what if it were possible to avoid some of that frenzy by embracing a more nostalgic vision of the holidays, one in which gifts are made by hand at home rather than bought in a crowded shopping mall?  Friends, I’m talking about herb finishing salt.

Now, I’m not just talking about any herb finishing salt.  Mine is an aromatic mix of tiny shards of salt surrounded by an abundance of thyme, rosemary, and sage flakes, more herby than briny.  The herbs contribute flavor and inflammation-fighting antioxidants.  The salt does what salt always does, only better.  It preserves the herbs (which it does exceedingly well — I have a portion of a batch I made almost a year ago and it still smells heavenly).  It adds a slight brininess.  Most importantly, it enhances the flavors of whatever it has been sprinkled with and on.

My version is both simple and economical to prepare.  It is based on a technique demonstrated by Sally Schneider on The Splendid Table, except that I use a slightly higher ratio of herbs to salt.  I also process the herb-salt mixture in a food processor both before and after the drying phase.  This produces a mixture with uniform pieces of herbs and salt, which results in a more consistent balance of herb and salt flavors in each pinch.

When you make the finishing salt, I recommend using a good quality sea salt (I like Maldon) and any combination of fresh (not dried) herbs that you like.  I didn’t include garlic (since my hubby is sensitive to it), but if you are partial to that odiferous (and highly nutritious) herb, then by all means include it. 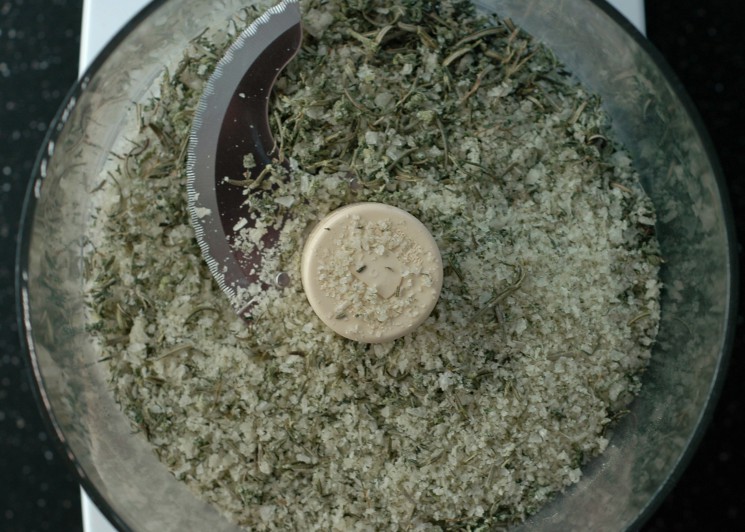 The uses for the finished product are only limited by your imagination.  I regularly use mine on all types of vegetables (my next post will be how I prepare and season green beans with it), meats and fish.  I sprinkle it in extra virgin olive oil that I dip fresh bread into, and I’ve been known to throw it on popcorn.   I even have plans to use it in my next batch of brownies or chocolate cookies.

One last tip:  Make the herb finishing salt on a day when you plan to have friends over for a visit.  They will be so intoxicated by the herby fragrance suffusing your home that they will practically beg you to include them on your holiday gift list. 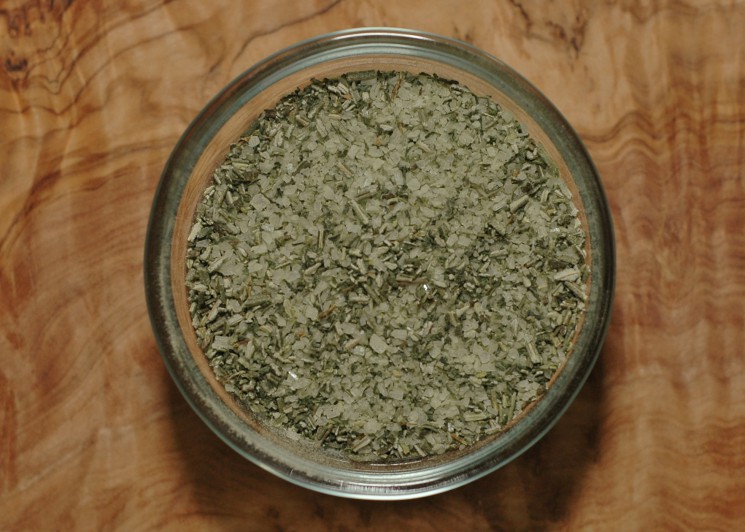 *Each serving is ¼ teaspoon.

**You can use any combination of herbs and herb-to-salt ratio you like, although I recommend more herbs than salt in order to maximize herb flavor and minimize the amount of salt per serving.

5 thoughts on “Herb Finishing Salt, or One Way to Stay Far From the Madding Crowd During the Holiday Season”